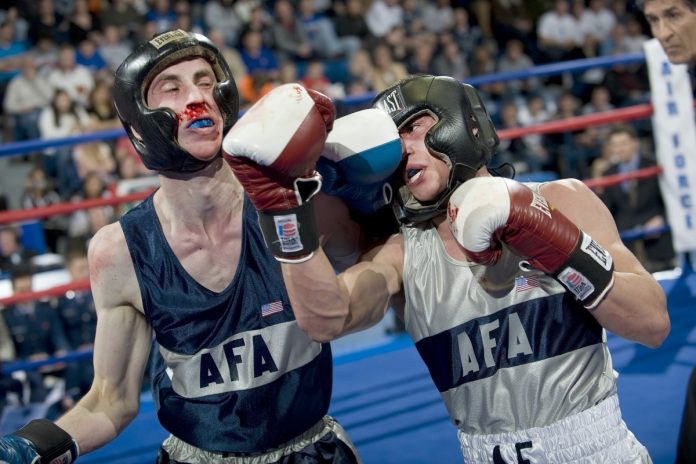 Being a full contact sport, injuries are highly common in boxing. Some of these are merely on the surface and aren’t lethal, such as nose bleeding and minor cuts. In this article we shall tackle how boxers stop nosebleeds.

The physicality of boxing is what makes the sport appealing to most people. It is exciting and sparks our curiosity.

Some fans feel a magnetic attraction witnessing how an athlete can endure so much and wonder how painful a cut on the brow or a nosebleed must be.

Meanwhile, some are more into boxing for its other aspects, such as strategy and the psychology of the whole experience.

If you were a newbie to boxing you would probably assume that it is because of its gore. And the truth is, to some extent, it comes paired with a stinging pain because of a punch or high impact (accidental elbow, for example) that must have caused it.

But nose bleeding by itself does not amount to much ache. It becomes more of a distraction to your performance as the fight wears on, and it might serve as a psyche booster to an opponent who takes pride in watching an opponent suffer.

If the bleeding, however, comes with a broken nose from a punch, it should be very painful depending on the gravity of the injury.

What Are Other Factors That May Contribute to Nose Bleeding?

Some boxers are bleeders. This means that a simple jab or two, a right straight early in sparring or in a real match may cause their nose to start, while others can take hard shots to the pan and never bleed at all down to the very end.

Boxers with aqualine or hooked and protruding noses are strong candidates to experience nose bleeding for obvious reasons.

There are some factors though that will contribute to aggravating it, such as:

How Do Boxers Stop Nose Bleeding While in a Fight

Prevention of a nosebleed during a boxing match can be a challenging task for the hired cut-man.

First of all, professional cut-men only get to treat their ward in between rounds, and that’s only for a span of a minute (max) from the time the bell is struck to signal a break.

So if you see them come rushing in to get to the ring that’s because there is literally no time to waste!

It gets even tougher as the fight forges on toward the late rounds and the boxer sustains other injuries that shall need attention as well.

Although it is rare that a bloody nose is ever considered lethal, it is a lingering distraction and it restricts an athlete from achieving an optimal performance level.

To be more specific on the matter, a nosebleed could cause constant breathing problems to a boxer.

With all the blood blocking one’s nose it will be more difficult to pace oneself in a match.

An improperly treated nosebleed, or hiring an ineffective cut-man could translate to poor performance levels especially when the going gets tough because this is where injuries start to happen.

It might factor in more when fights are real close and critical, when boxers tend to slug it out, and this could mean a hair-fine difference between victory and defeat.

When boxers get tired they usually huff and puff. The sniffing too will only irritate the nasal trauma.

To make things worse, once a nosebleed is initially treated, one can only hope it does not get hit again by another punch or the same problem recurs over and over again until the bout ends.

Generally, a cut-man dabs a cotton swab in a mixture of adrenaline hydrochloride and applies this to the bleeding area of the nose to stop the profusion.

Most damages that cause a nose to bleed is near the opening, and this is where pressure must be applied (nostril) using one or two fingers and a thumb while simultaneously using the other hand to dab the cotton and treat it.

Professional cut-men should be precise and efficient with what little time they have in their hands.

Apart from the actual treatment process, they must never forget to remind a boxer to sit straight, and prevent from leaning the head backward so they do not choke in their own blood.

They should also instruct their fighter to inhale and exhale through the mouth for the time being.

Hopefully things get nasty only towards the end of a match, if it must, or fighting with a broken nose early on can be real troublesome for any fighter, seasoned or otherwise.

A broken nose is usually detected when a blood flow is thicker and darker. To treat this, cut-men use an additional tool- a metal piece with a handle- called an enswell.

An enswell is often placed in a bucket of ice, and this cool temperature will aid in leveling the swell of the bruised area when applied on it with controlled pressure. The same goes when treating cuts.

Treating a common nosebleed and one coupled with a broken nose basically involves the same process except, of course, that the pain experienced will be considerably higher.

This, apart from the fact that once an opponent becomes aware of such injury it automatically becomes a favorite spot for him to target for as much as possible.

The Use of Ice Packs

As before mentioned, cold temperature will help ease the trauma in a swell or a bruise.

If you are wondering why ice packs are regularly used by coaches or cut-men to the back of the head or the neck of a boxer, this is aimed to lower the blood pressure normally experienced in highly physical activities, and to cool the blood traveling to your brain.

The more pressure there is, the more profusely the flow of blood can be expected, and thus the use of ice packs.

One of the reasons why nosebleeds are so common even when sparring at the local gym is due to the dryness inside the nose coupled with the sensitivity of our nose structure.

In some cases, other boxers just bleed more than others for possible genetic reasons.

Dryness of the skin means more friction. If you were a natural bleeder it would help to flex your nasal muscles by gently using your fingers prior to sparring.

It would also be extra helpful to moisten the inside of your nose by using a saline solution mixed with water, or a saline nasal spray.

Cut-men normally apply petroleum jelly not only to cuts but also on the inside of a nose moistened with a saline liquid solution.

Using petroleum jelly and a saline solution once or even twice a day, before and after sparring, will greatly alleviate one’s issues with nose bleeding.

It is worth noting, too, that nose bleeding can be more common to youngsters. Also, it may occur more regularly among noobs who are entirely new to sparring and are still getting used to being hit.

It is quite possible that some boxers who used to bleed in the nose when they were just starting up are able to adjust and overcome this problem as they progress and get acclimatized. 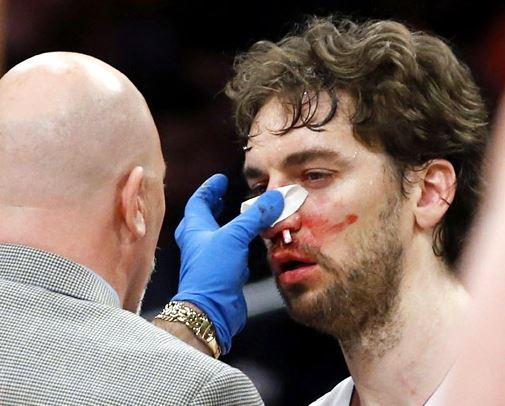 We have discussed the ways to treat a nosebleed in boxing. It would not be hard to agree that PREVENTION of a nosebleed should be more important in the first place.

To avoid nasal trauma, especially when training or preparing for a fight, it is important to use a proper headgear.

There are lots of them in various sizes, color, material, and design in sports shops.

Choose the headgear that offers:

Purchasing the proper gear and hiring the best cut-man should be a good start in avoiding or preventing a nosebleed in boxing. But it wouldn’t cost you a single cent if you learned how to apply effective strategy when you compete.

Use of Proper Head Movement

Whether you are on the defensive, or about to attack, always remember to use proper head movement.

This is just one of the many things that make the sweet science so interesting.

Moving your head side to side makes it a difficult target. From right to left, and vice versa, this swinging will make any opponent tentative in throwing a punch for fear of being taken advantage of.

While on the offensive, when throwing a jab or a straight, tuck your chin and slant your head a little when you facilitate the stroke.

For an orthodox boxer, as one throws a left jab, lean the head a little to the right. It makes you harder to counter versus a stiff, upright position.

Conversely, when throwing a straight right hand, slant your head just a bit to the left as though prepared to dock and weave a hook and counter upstairs with a hook or straight of your own.

Boxers are a complete marvel to watch. They are like ballerinas in gracefulness and ease of movement. But boxing itself is not for the weak and injuries can be common occurrences.

Always study and apply the best practices, medications, and alternatives used to avoid injuries. They will be very helpful as you progress, shall preserve good health. Never miss any opportunity to prolong your career.