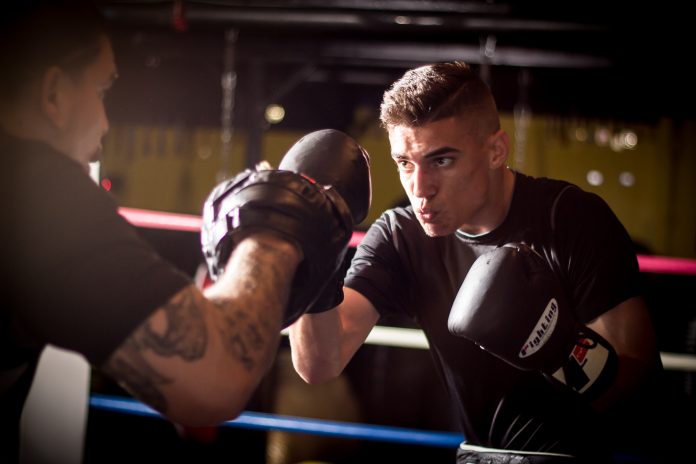 The Boxing Triangle Theory is all about slipping and countering your opponent and it gets its name from using a conceptual triangle that can be used in the ring.

But, let’s cut to the chase, this isn’t an article talking about 3 different fighters and the possible outcomes of what happens when who fights who or comparing their weaknesses vs outcomes

Contrary to popular belief that is not what the boxing triangle theory is.

We’re going to have a look at one of the foundational boxing concepts known as the Boxing Triangle theory, there are others such as the diamond or hex theory, but lets learn the basics first!

It was once a well-known method but it seems to have been forgotten in recent years, so if you put it to use you may end up with a worthy new tactic.

We’re going to have a look at how using these advantageous positions can allow a boxer to attack the opponent from a 45-degree angle or the outside angle.

We’re also going to explain to you why slipping and countering from angles can be such a successful strategy as a boxer, or how you can avoid being a victim of it in your own matches.

When you look at the most basic forms of the boxing triangle theory, fighters learn how to establish an equilateral triangle. It clearly has to be envisioned in the mind, but you can practise by marking out a triangle on the floor using sticking tape or whatever you prefer.

Practising with a clear diagram in front of you will help you understand the process. This can be done with your trainer, a sparring partner or even by yourself.

The idea is to move along the sides of the triangles, aiming to keep your opponent on the inside of the triangle, allowing you to establish an advantage in various different scenarios. It is very simple but very effective when you fully encompass everything required to make the theory successful.

Check out the video below on the triangle theory, it’s quite long.. but well worth the time.

You still need to rely on your boxing instinct

Like all things, it may sound perfect on paper but it is useless without developing a sharp boxing brain and creative instinct to boot, you should always be working on developing your agility and reflexes so you can put your strategies to use.

You’re a boxer, not a mathematician

If you start thinking about how to create the perfect triangle above all else in the ring, you may end up eating a lot of punches or going to sleep. The triangle is the simplest way to explain the advantage of being at each point in the theory, it certainly isn’t there to complicate things.

Your opponent should always be in the centre of the imagined triangle, whereas you want to be at any of the three points of the unilateral triangle.

The starting position – neutral – no advantages

We mentioned the basis of this is your opponent should always be at the centre of the triangle, with you being at one point of the triangle, neither of you will have an advantage at this point.

The advantage comes to you when you engage your opponent.

If you reverse the triangle, then your opponent will place you in the middle of their conceptual triangle. (if they know what the theory is) Any boxer can use this theory, so if you plan to use it as a weapon in your arsenal, there should be a backup plan in case they do the same to you.

The effective outside angle

After you have grasped where you and your opponent should be in the conceptual triangle, it is time to start thinking about how to formulate your attacking moves based around it.

We did mention some of them, but let’s look at it in greater detail.

When the lines are used correctly, it opens up the opponent to recieve strikes from both hands because they are out of the person’s immediate line of sight. 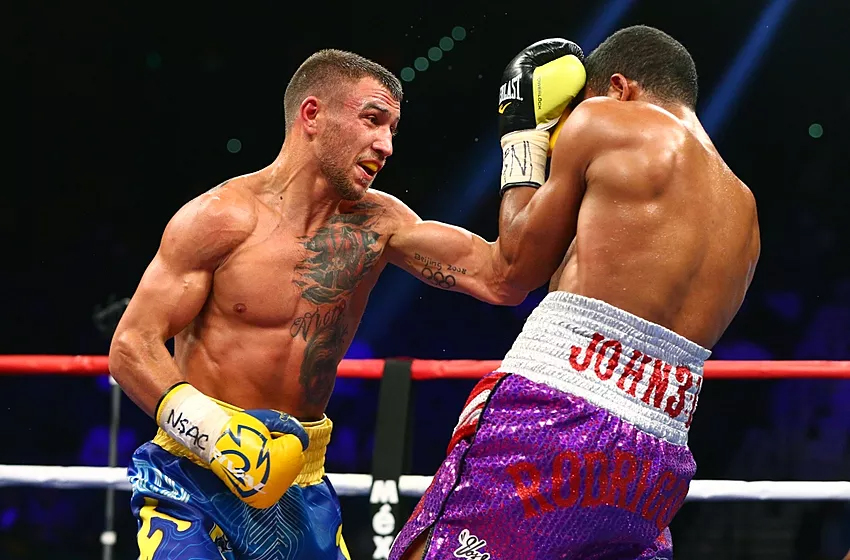 Lomachenko has an incredible understanding and usage of the boxing triangle theory. When he uses this strategy he never keeps his feet stationary. Instead, he uses his lead foot to step forward along the line of the triangle, giving him an advantageous angle over his opponent.

With fast timing and the correct pivoting, he can open up his opponent and get to the outside of the boxer’s lead shoulder. Being outside the lead shoulder signals that Lomachenko has established an outside angle.

Vasyl has learned to slip the jab and keep his opponent occupied, then when the boxer tries to counter or block this move, they leave themselves open for an attack.

He is considered as one of the best boxers in the world today, so that shows that the boxing triangle theory is still relevant even if it is not mentioned to the public very much.

Lomachenko doesn’t limit himself to this particular style, he is very elusive and has a great variety of styles and theories to combine the sweet science of boxing. The best boxers in the world know how and when to switch between styles and always keep the upper hand.

This only works when your opponent is attacking you, it’s a conceptual subject. It can help you glide around the ring and create some beautiful boxing movements.

The idea is to keep your opponent constantly occupied, switching up your angles and using your footwork together to deliver unpredictable destruction of your opponent.

Force your opponent to always change their position whilst remaining defensively responsible. Then when you have mastered the boxing triangle theory, its time to incorporate the diamond and hex theories.

Q. What type of fighter is best suited to using the boxing triangle theory?

We are going beyond the Duchess of Queensbury rules here, but the best-suited style of fighting for the boxing triangle theory is that of an outside fighter.

The theory relies on fast feet to be really effective, plus the elusive ways of this can make up for a lack of punching power.

The combination of speed and countering embody an outside fighter and meet the teachings of the boxing triangle theory.

Q. Are there any flaws in the boxing triangle theory?

Yes, it can be used against you and if both fighters know how to use it, you will have to rely on other tactics to overcome your opponent.

It is definitely not a one-size fits all fighting strategy, heavyweights are not going to find it as effective as a welterweight, as an example.