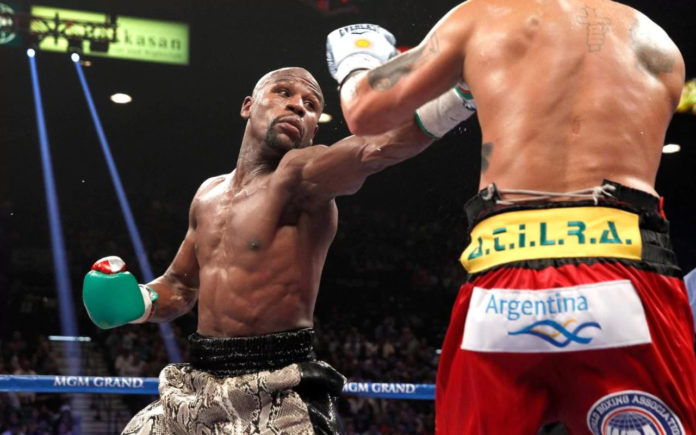 We can all easily picture the classic image of a proud boxer getting for a battle. Gumshield in mouth, muscles tensed and silly big shorts that go way up higher and way down lower than normal shorts. Yeah, what is that all about anyway?

Most people probably wonder at some point why boxers’ shorts are so big. Is it just a fashion statement or is there some other reason for them using a size of clothing that would normally look ridiculous anywhere but in a circus?

They weren’t always this big, though. If you remember watching Muhammad Ali, Roberto Duran or Mike Tyson in their prime then you can probably recall them fighting while wearing shorts that are fairly long but nowhere near as big and baggy as those worn by modern day fighters.

Well, the truth is that there are some very sensible practical reasons for the over-sized shorts that boxers now wear when fighting. The following are a few of the issues that you might never have thought of before.

To Stay Cool and Comfortable

Big, loose shorts will help the boxer to stay cool while they move around the ring in a hot, crowded arena. They also help the blood to circulate as well.

When you think about it, there is no need for boxers to wear tight shorts or smaller shorts that could cause them to over-heat or be uncomfortable. Since they only use their hands for combat (or their teeth if they are feeling like the baddest man on the planet but are losing a big fight) there is no reason to reason to use shorts that allow them to lift up their feet or carry out other moves.

This is why MMA shorts, for example, are tighter, lighter and more flexible. The fighters in this sport have to be able to use their whole body against their opponent, so can’t use long, baggy shorts like a boxer does.

Since a boxing bout can last for up to 12 punishing rounds of 3 minutes each, it is no wonder that boxers need any help they can get in staying cool. Indeed, the longest boxing match in history is said to have lasted for a staggering 7 hours, with each fighter losing around 10 pounds in weight. If only they had modern shorts on then those 7 hours might have flown by more a little bit more comfortably.

For the Foul Protector

A foul protector or groin protector is an essential piece of equipment for any boxer who plans on walking normally and keeping his reproductive organs in working order for longer. This is a fairly big piece of equipment and it goes under the shorts, so there has to be room for it to go in there and stay hidden from sight.

Of course, the bigger the foul protector the better, so there is no incentive for a boxer to use a smaller one just to look more streamlined. If he can protect his most treasured possessions in the most effective way possible then losing a little bit of style along the way is a small price to pay.

This piece of equipment has been around for a long time in the boxing world but are they getting bigger and higher over the years? Certainly, this Lennox Lewis vs Evander Holyfield fight caused a few surprises due to the comically high shorts that both wore, especially Lewis, which was attributed by some sources to them asking for extra big foul protectors.

What a lot of people don’t realise is that a groin protector isn’t just about keeping the fighter’s most delicate area safe. They go up a lot higher than you might imagine, to make sure that painful blows on unprotected hips and upper thighs are also avoided. Therefore, they need shorts that go higher than normal to cover them fully.

To Reduce the Target Area for His Opponent

So does having a bigger pair of shorts mean that the fighter’s opponent has to aim higher because of this? Technically it doesn’t, as the belt referred to in this case isn’t the top of a boxer’s shorts. The definition given in the rule book is that the belt is an “imaginary line drawn across the body from the top of the hip bones.”

Therefore, the height of the shorts that are worn shouldn’t really have any effect on whether or not the punches received by a boxer are classed as legal or illegal.

Having said that, could having a higher pair of shorts be a psychological advantage as it makes the other boxer think that he has less of a target area to hit, even if that isn’t really the case according to the rules of boxing?

There is definitely cause to think that this is the case. Also, if a boxer were to hit a rival below the waistband of his shorts but above the imaginary line that is the “belt” the crowd may probably howl in protest and claim it as a foul punch even though it wouldn’t be one.

Back in the old days we can assume that advertising on boxing shorts wasn’t an issue. So, could the appearance of numerous sponsor’s names and logos on shorts now be a reason why this type of clothing is getting bigger?

Let’s start by looking at the example of Manny Pacquiao when he fought Floyd Mayweather Jr in 2015. Billed as the The Fight of the Century, this was a bit of a damp squib of an event in the end.

Yet, both boxers earned an enormous sum of money from this battle in Las Vegas. Manny is believed to have earned $80 million or so from the fight with $2.25 million from the sponsorship of his shorts alone.

The Filipino boxer had a number of different firms paying for the right to advertise on his clothing during the fight, leading to them being called the most expensive shorts in history. Just think, if he had worn full length trousers or harem pants he could have earned a few million more.

There are clearly a number of good reasons why boxers were such big shorts. Not everyone likes them but there appears to be little chance of them getting shorter anytime soon. If anything, we can expect to see them expand to provide more valuable advertising space in big fights.